How to pack for six months and make it fit into one bag?  Sounds simple (not really).  The toiletries, assorted power cords, chargers and camera back-up systems, footwear and did I say toiletries (?) don’t really leave a lot of room for clothing.  Now while I am not quite ready to join the “one pair of underwear, six countries” movement, I have tried to earn my “one bag” stripes. I failed. I failed miserably.

My cameras and lenses take up my carry-on bag if they’re cinched tight so they look much smaller and lighter than they actually are and if they aren’t weighed.  Because really I am carrying at least seventeen pounds in my pack sack. Luckily for me the day they insisted on weighing the carry-on I had a travel companion (Yea Kim!) who had some space in hers for an extra camera and lens.

So one bag.  I understand the theory and really tried to meet the challenge, even going so far as to purchase the Rick Steeve’s One Bag Pack Sack.  As previously mentioned, it is full of cameras and lenses.  Adjust criteria to two bags – one on the back and one checked.

So what are the clothes that I am schlepping around in that checked bag?  Four pair of underwear (allows lots of time between washings), two bathing suits (supposedly hot climate in my future), no socks (two pairs purchased for freezing feet after 10 days), one long skirt that doubles as a dress (after 29 days still unworn), three merino T-shirts (that truly, truly, truly do not smell), two travel skirts (that it’s been too cold to wear but I am sure will be worth their weight in gold in Asia), and two, now three pair, of convertible pants, a dash of three long-sleeved shirts made of varying fabrics (synthetic travel fiber to light airy cotton), a pair of silk long-johns and a sleeping shirt and sarong and there you have it!  Oh yes, and a pair of hiking sandals, flip-flops, close toed shoes (for Asian temples) and a new pair of light weight runner type shoes (which had to be purchased for the cold and wet).  AND a rain jacket and thin fleece and pashmina (which have become the anchors of my last nineteen days in Australia).  NOT one bag.

And quite frankly, not my usual choice of wardrobe. No jeans.  No leggings.  Nothing stylish and hip.  Nothing that will turn your head.  No soft, drapey fabric tops. No floaty fabrics that feel wonderful against the skin. Nothing much particularly feminine unless you count the sarong teamed with the nightshirt.  And while I will admit to wearing that at least once a day, it’s usually in the privacy of my bedroom and not out. So, not my usual wardrobe.  Or, SO NOT my usual wardrobe.

I’m not sure if you understand how difficult it is to coördinate a wardrobe out of fabrics and pieces one isn’t particularly fond of?  It was difficult enough selecting the garments to pack; doubly so selecting what to wear each day.  While I can survive and have even begun to grow fond of, the indestructible convertible pants, I can’t say they are particularly flattering. Team them with my slightly mismatched T-shirts and over shirts and I won’t be heading for the nearest cat walk any time soon.  I pacify my vanity with the realization that I am of an age where most men wouldn’t notice me anyway.  (Gulp.  That’s a biggie.). But still.

We’ve all seen those travel videos of the cute girl in the fashionable clothes posed against many exotic locations.  That is not me.  Sigh.  So what’s a woman to do?  Given my lack of a personal Sherpa, grin and bear it I guess since grin and bare it just won’t fly.  Unless you know of any volunteers who want to pay their own way…? 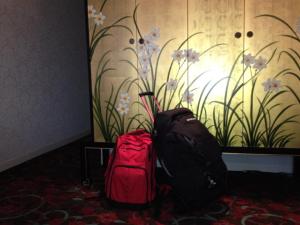 All ready to go

One thought on “What to Pack for Six Months”